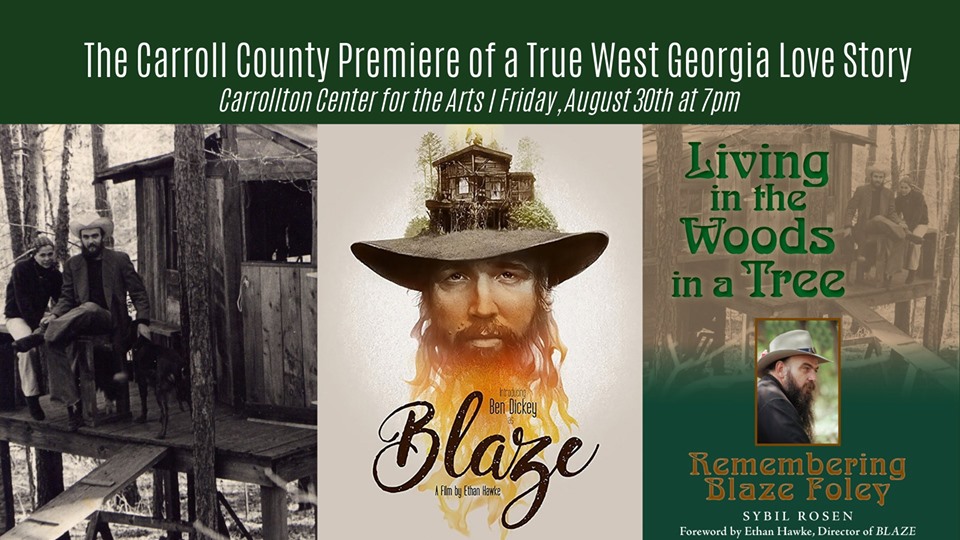 Join us on August 30th at 7pm at the Carrollton Center for the Arts for the Carroll County premiere of the 2018 independent film “Blaze,” based on the life of country music legend Blaze Foley who once lived in a tree house in Roopville with script co-writer and Whitesburg resident Sybil Rosen. The film, directed by actor and filmmaker Ethan Hawke, debuted to critical acclaim at the Sundance Film Festival and now comes home to Carroll County, where Foley began writing songs after meeting Rosen in 1975 at Banning Mill, at the time a quasi-artist colony. Blaze Foley is best known for his songs “If I Could Only Fly” and “Clay Pigeons,” covered by the likes of Willie Nelson, John Prine, and Merle Haggard. Foley was once Michael David Fuller, an aspiring but aimless musician who came to 1970s countercultural Carroll County after working as a roadie for the band Buzzard’s Roost, who nicknamed him “Depty Dawg.” It was during Foley’s time living with Rosen in a makeshift platform in the woods of Roopville that he christened himself Blaze Foley and began writing the songs that would one day make him a legend. “Blaze” is rated R for language throughout, some sexual content and drug use. The premiere will be followed by a Q&A with Sybil Rosen.
Screening sponsored by Underground Books.

Living in the Woods in a Tree is an intimate glimpse into the life of music legend, Blaze Foley, seen through the eyes of Sybil Rosen, for whom Foley wrote his most widely known song, “If I Could Only Fly.” Rosen offers a firsthand account of their life together in a Georgia tree house during the countercultural 1970s and Foley’s transformation from reticent hippie musician to enigmatic singer/songwriter. Foley’s songs have been covered by Lyle Lovett, Willie Nelson, John Prine and Merle Haggard.

The Carrollton Center for the Arts will host a luncheon with local music legend Blaze Foley’s biographer and friend, Sybil Rosen, at 12:30 p.m., August 29. Her book, Living in the Woods in a Tree, is Rosen’s firsthand account of her life with Foley during the countercultural 1970s and Foley’s transformation from reticent hippie musician to enigmatic singer/songwriter. The two met in 1975 at Banning Mill and once lived in a tree house in Roopville. Foley wrote his most widely known song, If I Could Only Fly, for Rosen. His songs have been covered by Lyle Lovett, Willie Nelson, John Prine and Merle Haggard. Tickets to the luncheon with Rosen are $30.

Also…
On August 30, Underground Books will present the 2018 film, Blaze, based on Rosen’s book, at the Center for the Arts. The film was directed by actor and filmmaker Ethan Hawke. Rosen will take part in a question and answer session after the screening. Blaze is rated R. Admission to the Blaze screening is $10, including popcorn and a drink.

Visit carrolltonarts.com or call 770-838-1083 for tickets and more information.